HomeKit Weekly: With HomeKit support, Twinkly lights are now useful year-round for lighting effects based on Apple Music and more

I’ve been watching Twinkly as a product for the past year after learning about them through Shane Whatley’s YouTube channel. Previously, to work with HomeKit, you’d need to bridge them using a product like HOOBS. Late last year, however, native HomeKit support was added. You might think these items are only for Christmas, but they will be useful in all sorts of situations – not just Christmas lights.

HomeKit Weekly is a series focused on smart home accessories, automation tips and tricks, and everything to do with Apple’s smart home framework.

Twinkly lights come in various lengths, but I started with the 250-foot version. There are options that come with less and more as well. I would measure what you need ahead of time as they aren’t extendable, nor can you “cut” feet off a wall. I always operate under the mindset that I’d rather have more than not enough.

In unboxing Twinkly, I was expecting a cabling nightmare. Christmas lights are generally pretty difficult to wrangle, and then adding electronics on top of it – seems like a nightmare in waiting. But, to my surprise, the team at Twinkly put a lot of effort into making the lights easy to string and avoid getting tangled. During December, I started testing them, and since our Christmas tree was already lit for the year, I decided to string them up to our stairs to the second level of our home. The entire process took maybe ten minutes, including taking the dog out during the middle of it. 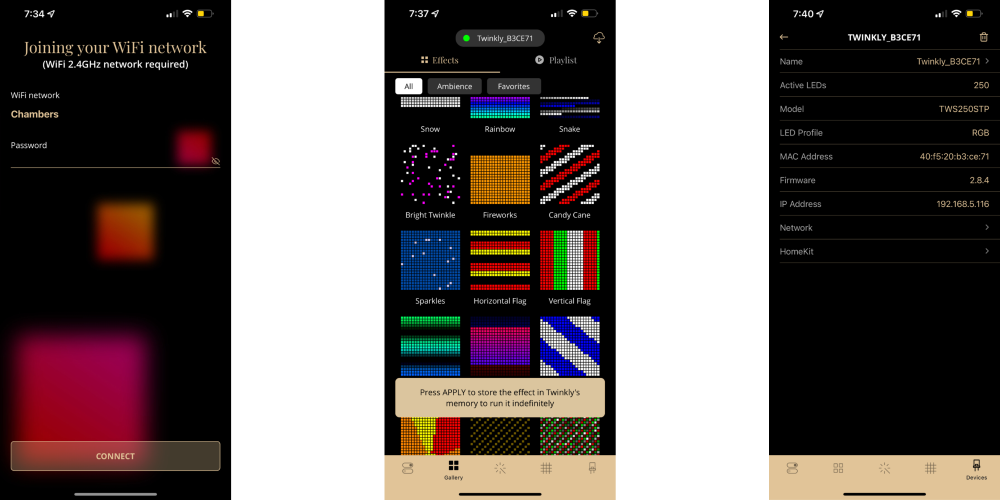 Once you have the lights where you want them, you’ll use the Twinkly iPhone app to onboard the lights to your Wi-Fi. It’s a pretty smooth process that includes holding the power button until it lights up blue/green. After the app detects the light, you’ll enter your Wi-Fi password, and you’re off to the races.

I also picked up Twinkly Music, which is a USB-powered dongle that can synchronize your lights to a nearby sound source. I plugged it up right near one of my HomePod minis. When you set the app on “Music mode,” it’ll bounce your music to what’s playing on Apple Music, Spotify, etc. At a price point of less than $50, Twinkly Music is an ideal add-on for Twinkly.

One complaint I had is I couldn’t seem to tie a specific light playlist to run while music was playing. That’s something I’d love to see Twinkly add in a future update. The Music section runs based on music types (pop, chill, etc.).

Otherwise, it’s a fantastic add-on and would be great for a dinner party, gaming room, etc.

Like I mentioned at the beginning of this article, Twinkly recently added HomeKit support to the lights. Onboarding is done in the Tiwnkly app in the settings. My lights required a firmware update, so if you don’t see the HomeKit section, check to make sure it’s up to date.

The Home app can’t control all of the settings of Twinky, other than turning them off and on and setting the brightness level. So you’ll need the Twinkly app to start the music function as well as trigger the various light effects.

HomeKit support will be helpful in using other devices to control the on/off function of the lights. For example, let’s say you used them in a patio set and you use HomeKit to set them to turn off and on based on dusk/dawn, a HomeKit enabled door sensor, or the motion sensor aspect of an outdoor HomeKit camera. If the lights are used indoors, you could use an indoor motion sensor to turn them on. In my testing, if the Twinkly lights are turned off using a pattern not supported by HomeKit, turning them back on using HomeKit retained that light pattern.

Wrap up on Twinkly

When I started testing them, I assumed Twinkly would only be useful during Christmas time, but in my testing and use of them, I’ve realized they are an upgraded version of a HomeKit light strip. So I plan to use them to string lights above our outdoor patio in the house we’re building.

After sparring with Apple, Fanhouse adopts in-app purchases on iOS with 50% higher prices