Apple’s AirTag tracker has saved the day again, this time for a dog in San Bernadino County who was “swept away by floodwaters.” Rescuers, however, were able to locate the dog thanks in part to an AirTag that the pup’s mom had attached to his collar.

The doggo, an Australian Shepherd named Seamus, pulled away from his owner on a walk and ended up in a flood control basin. He was then pulled away in “fast-moving waters,” disappeared from view, and crawled into a nearby access tube.

“He got away from me and he just went down into this drainage. The water was going so fast I think all it took was one paw in that water and he was gone,” Seamus’ owner Emilie Brill said in an interview with ABC7.

Bystanders then helped Brill flag down first responders and rescuers, who jumped in to help locate Seamus.

Luckily, Seamus was equipped with not only a normal ID tag on his collar but also an AirTag. Using this, plus the sound of Seamus’ barks, first responders the pup nearly a mile downstream from where he first entered the storm drain.

“Seamus was equipped with both Apple AirTag & a conventional ID Tag, which aided rescuers and owners in tracking the pup and reuniting them,” first responders said. 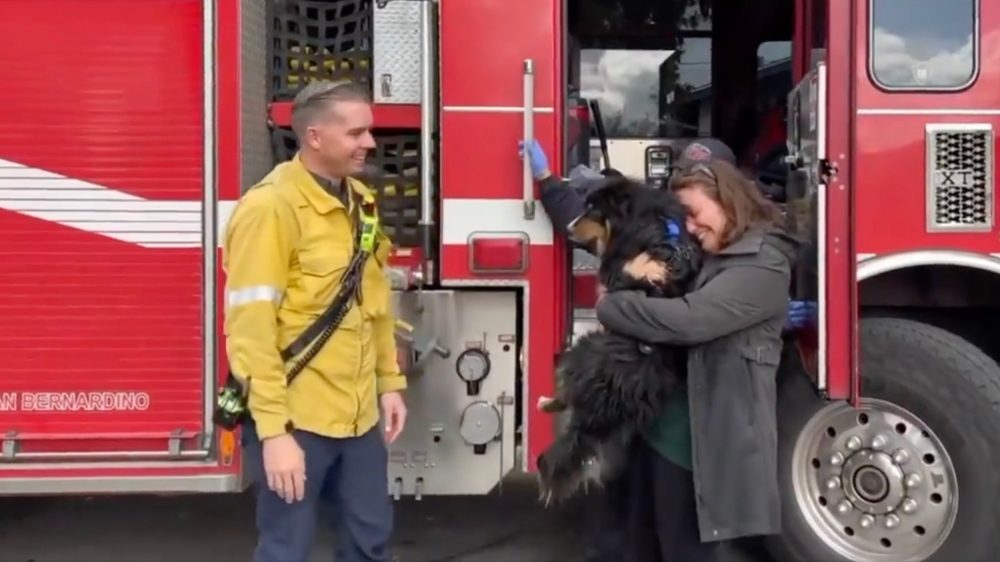 The San Bernadino County Fire Department posted a recap of the situation on Facebook:

Seamus, a one year old Australian Shepard, was swept away in a storm drain after running away from his owner on a walk. Before his dog mom could grab him, he found his way into an adjacent flood control basin and began floating away in fast moving waters. The owners began searching & crews were dispatched to assist.

Firefighters arrived in the area, working to locate the dog in the storm drain. While canvassing the area [the crew] was flagged down by an employee at a RV facility on East Redlands Blvd. The employee had heard a dog barking in the nearby channel & witnessed the dog floating down the channel.

He followed Seamus and observed the dog had found a way out of the water into an access tube nearby. Firefighters were flagged down & found Seamus in the tube staring back at them. He traveled nearly a mile from when he entered the storm drain. He miraculously made it out of the fast moving water & was stuck at the bottom of the tube.

The crew took Seamus with them in the fire engine, drying & warming him up on the way to his house. Once arriving firefighters made contact with his worried owners & reunited the family back together. Seamus was equipped with both Apple AirTag & a conventional ID Tag which aided rescuers and owners in tracking the pup and reuniting them.

Seamus was “uninjured and in good spirits” after being rescued. Apple, of course, says you shouldn’t rely on AirTags to help track your dog, but we’re glad to see that it helped Seamus anyways.